History of the Pub 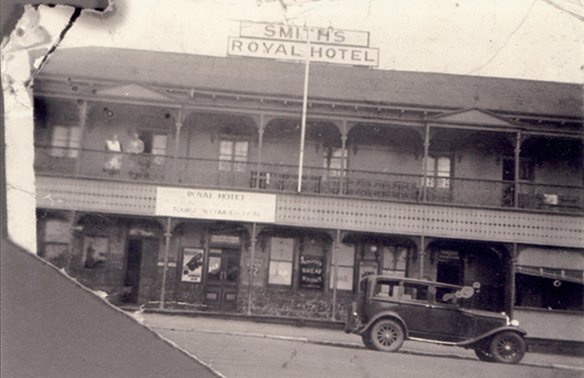 Martin Larkin must have known a thing of two because this was the period when Moss Vale really started to boom. The railway was coming, and with it all sorts of new opportunities for rural and commercial development.

The railway station at Moss Vale was opened in 1867 but it was called Sutton Forest. The first refreshment rooms, however, were located in Mittagong. The Governor or New South Wales at the time, The Earl of Belmore, resided in Sutton Forest and, for his convenience, the refreshment rooms were relocated to Moss Vale.

The Moss Vale Hotel is still located on the same grounds as the original Moss Vale Hotel. The original building had a thatched roof and, as at present, was a two storey structure. Of course, in the 1860’s there were no buildings close by. The hotel had paddocks at the rear and also had a stable for horses.

The public house had a name change in 1869 to the Terminus Hotel (obviously because of the railway) and then later became known as The Royal.

The Old Post Office in Miss Vale was erected on the present site in 1871, opposite the railway station. The fountain memorial to celebrate the rules of Queen Victoria was built in 1897.

In 1936, the local Return Soldier Organisation decided to erect a memorial, to the fallen brethren from the First World War, on top of the fountain and hence the Clock tower was built. Today the Clock tower is one of Moss Vale’s most popular features.

Probably Moss Vale’s best known watering hole, the Moss Vale Hotel is known as the “Pink Pub” or “The Pub at the Clocktower”.